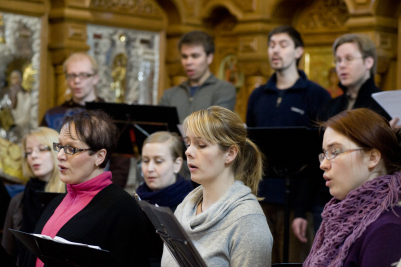 The Krysostomos Chamber Choir has established itself as one of Finland's leading Orthodox choirs. Founded in 2003 by Mikko Sidoroff, the ensemble is active across the country and rehearses during several weekends a year. Krysostomos is specialised in performing contemporary Finnish Orthodox church music, also premiering new compositions annually.

The name of the choir is derived from Greek and means "golden mouth". It also refers to John Chrysostom, archbishop of Constantinople, who lived in the 4th century and who received his epithet due to his celebrated skills as an orator.

The Krysostomos Chamber Choir has released four recordings under the label Alba Records: Panikhida (2007), O Gladsome Light (2011), The Great Lent (2015) and Deesis (2016). The first of these, Panikhida, was named choral recording of the year 2007 by The Finnish Choral Directors' Association and The Finnish Amateur Musicians' Association.

During its existence, Krysostomos has paved the way for new Orthodox music. The sacred works by Mikko Sidoroff form the backbone of its repertoire. In addition, the choir has given first performances of music by, among others, Ville Matvejeff, Henri Sokka, Lauri Mäntysaari and Pekka Jalkanen. Thus, the continuation of the rich Ortodox church music tradition is an essential element in the choir's work.

Mikko Sidoroff, born 1985, is a Finnish choral conductor and composer living in Germany. He graduated from the Sibelius Academy as Master of Music in 2011, and has worked with numerous choirs in Finland and abroad. In 2018, he was appointed opera chorus master at the Landestheater Coburg, where we has been working since. He has also taught choral conducting at universities and other educational institutions in Finland and Germany.